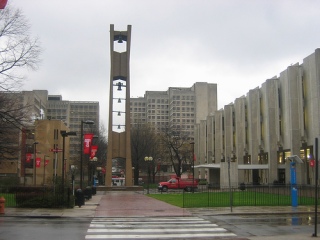 Black Studies is not in crisis, but white faith in it is.

Like Ethnic Studies, or Women’s Studies, or even Labor Studies, the field seems – to the fearful and uninitiated – designed to provoke guilt, shame, and remorse, to divide rather than to unite.  Dragged through the mud during the epic “identity politics” phase of American history, the field is an easy target, with a lot of the background narrative already written.  Scandal is expected, anticipated, even desired.

So whenever a Black Studies department has its inner workings splashed on the front page of Inside Higher Education or the Chronicle, I am never surprised to have people sidling up to me at the water cooler (read: Whole Foods), and asking, “Hey, what gives at University X?” (read, most recently: UNC, Cornell).

Now, Temple University’s long standing Afro-American Studies department is in crisis.  Again.  In the middle of a fiscal downturn, a chair has retired, the department’s choice for a replacement has been rejected, and the dean has substituted someone from upper administration, effectively putting Afro-American Studies in receivership.  Searches have come to naught.  An external review from two years ago has been bottled up, its mysterious prescriptions contained.  All lines of communication between students and faculty and administrators seem to have been shut down.  And the graduate students enrolled in Temple’s historic doctoral program in the field have appealed to the university’s trustees (via a lengthy email sent, as well, to many in the field) for a strong-armed intervention, lest the department’s considerable contributions to higher learning be lost.

Ibram Rogers, a Professor at SUNY-Albany, has a thoughtful dissection of the letter from the graduate students at Diverse Issues in Higher Education, in which he emphasizes the “micromanagement” of the department’s affairs by the current dean.  It is worth reading.

The issue isn’t merely one of micromanagement, though.  Often, the problems of Black Studies flow from the opposite direction.  Universities, accustomed to the strategic deployment of black faces from African American Studies on committees, sometimes (if not almost always) value racial representation more than good governance or attention to the curriculum. With an ethical call to serve outside of the department (and even outside the university) faculty of color (in all departments, and not just African American Studies) are more greatly burdened with obligations beyond the usual “teaching, research, and service” triptych, but they also get less mentoring and, perhaps as a consequence, are more likely to be denied tenure or find their path to promotion cluttered.  Deans, unwilling to appear “racist,” refuse to ask African American Studies departments to adhere to best practices, let a few small things slide, and then a few big things, until everything falls apart.  Micromanagement is a problem, but, as victims of “the soft bigotry of low expectations,” Black Studies departments are just as likely to have less oversight, less guidance, and less support, even as demands for their faculty to appear in public, and to represent “the race” within and without the university grow.

But in a weak department…serious and very real problems can result.  I don’t think that an honest reckoning of the white crisis of faith in Black Studies can happen until we admit that, in some cases and in some Black Studies departments, there are histories of abuse and harassment, academic misconduct and governance disasters.  These problems happen everywhere, though.  The sad truth is that, for too long, these very real concerns have been diagnosed as something that wells up from within Black Studies alone, as if the study of blackness itself were a disorder that produced other internal disorders.

Of course, all small departments representing any field or interdiscipline are in perpetual danger of crisis. All of them fall apart at some time.  A small faculty can, in the worst case scenarios, be easily fractured and divided.  In a small unit, alliances can be forged, as if the academic year were akin to a season of “Survivor,” and those alliance can make repair and reconciliation more difficult.  In a small department, everyone knows everyone too well, so you can script the dialogue at every faculty meeting, anticipate the slights and instances of disrespect, and prepare rebuttals.  Well-rehearsed speeches – laced with verbal napalm – are issued via email, broadcast to everyone, making alliances permanent, replacing flesh with scar tissue.  Not surprisingly, small departments in crisis recover slower, and often only after many departures.

And most Black Studies departments are small.

Beyond its size, however, it is the cycle of neglect followed by micromanagement, or overcorrection – a cycle ritually enacted on a complicated racial terrain – that makes the crisis happen so regularly in Black Studies departments.  And it is the public’s obsession with racial “failure” – that is, with the awful spectacle of African Americans missing enrollment targets, blasting through policies and procedures, and fighting for sport  – that envelops this cycle with an affect of expectation and desire.  The crisis of white faith demands proof.  And so the conditions that produce that proof are manufactured.  And when it all falls apart, everyone gathers at that water cooler and gossips.  And, I suppose, at some level, they enjoy themselves.

There is nothing a single dean can do to fix this – unless that dean is really, truly courageous.  A dean who shows favoritism to one “faction” can make things worse.  A dean who walks away to let the department “find itself,” or who declares a department to be radioactive and walls it off with concrete, lets the enmity grow.  A dean who decides to give the department some tough love and nothing else invariably applies pressure only to the fault lines.  In the absence of a sustained, university-wide commitment to the field, the best short-term solution is the most comprehensive and expensive one – new faculty lines inside and outside the department, so that departmental isolation is replaced with system-wide integration; intensive mentorship of faculty currently within the department, and pathways to promotion for those who deserve it; professional mediation, so that everyone understands everyone else, and so that a cohort of faculty aren’t simply abandoned until they die or retire; and a psychological re-programming of the entire university administration, to break the cycle.

But we only reserve those solutions for STEM fields.  Or for Philosophy.  Or for History.

And so the perverse cycle continues.  Because, if there is one constant in American life, it is that white faith in black people is always and forever in crisis, with terrible consequences.

View all posts by mpg734